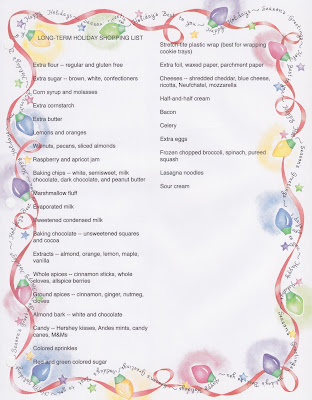 Some of us (like me, for example) can be very slow learners.  Every year when Thanksgiving and Christmas roll around, I try to get a good start on baking cookies and doing some freezer cooking.  That's a great plan and it usually works out fairly well.  But sometimes I really defeat my own purpose by running out of some important ingredients.  I'll carefully make sure to buy extra parchment paper and butter, but then run out of something pretty ordinary like baking cocoa or vanilla.

This happened to me again last year, and I was trying to think how to circumvent it in the future.  I realized the need for a more comprehensive holiday grocery list -- and the whole idea sounded somewhat familiar.  And yes, believe it or not, right in my Christmas notebook I had a list titled "Long-Term Holiday Shopping List".  I think it was an idea from FlyLady some years back.  It includes not just baking ingredients, but also groceries for our traditional Christmas Eve meal, ingredients for a few freezer meals and kitchen gifts, and more. It's such a great idea to check this list against your pantry contents before beginning to bake or cook for Christmas, to find out what will be needed.  But it's only a great idea if you use it, and obviously I hadn't been.

I'm sharing my list, but really it will differ for everyone.  In fact, as I looked it over I saw that there were a number of things I needed to add.  So I added them in, and have now actually printed out the revised list and placed it in my notebook.  You see its image above, but in case it's too hard to read, here's the print version below.

If you've never had a list like this, why not make one up, taking note of specific ingredients required by your own favorite family recipes for the holiday.  You'll also want to add in any ingredients for new Christmas recipes you want to try.  Then check your list against what's in your pantry, fridge and freezer.  Hope this idea saves someone a trip to the store!
Posted by Mrs.T at 5:00 AM