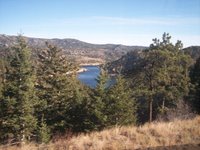 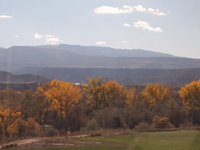 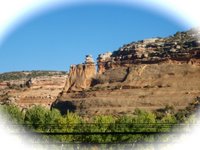 The above are just a few of the scenes we observed as the California Zephyr wound its way through the mountains of Colorado and Utah.

As mentioned before, the California Zephyr is a Superliner train. The cars have a second level. Here's an excerpt from my journal:

October 11 -- "Our room on this train seems a tiny bit smaller and there is no sink or toilet, but the bathrooms are very close by, and there's a nice shower (much larger than on the previous train) just a few steps away from our door. This train has an upstairs, and we have to go up there to access the dining car. So far, it's a very nice train!"

On that first day, we spent some time in the observation car and enjoyed it very much, even though the sights so far were nothing compared to what they would be in the Rockies. One highlight was crossing the Mississippi River in Burlington, Iowa. Even though the afternoon was gray and drizzly, it was still a majestic sight.

That night, I had the salmon fillet for supper. It was absolutely delicious. Mr. T chose pork shanks. One of the dessert offerings was chocolate bundt cake, which I assumed would be just a slice of bundt cake. Not so! It was -- as I observed from dessert trays being delivered to other diners -- an individual chocolate mini-bundt cake, covered in chocolate ganache and drizzled with white chocolate. We didn't have time for dessert that evening -- we should have ordered it at the time of ordering our meals, we discovered after the fact. Oh well -- we probably didn't need the calories, anyway!

The dining car staff is absolutely amazing -- they manage to feed all these people on a moving (sometimes lurching) train, and they do it so efficiently and graciously. There are white tablecloths, cloth napkins, and -- on the California Zephyr, anyway -- real flowers on the tables. We found that when the trains are full, you don't usually need reservations for breakfast, but for lunch and dinner a dining car staff member will go through the train and ask people to make reservations for the time they prefer to eat. It seems to work out pretty well.

We had a better night's sleep, in spite of several stops during the night when passengers boarded the train at various stations along the way.

October 12 -- Breakfast was French toast for both of us, with pork sausage patties on the side. Our dining companions were a nice couple from Minnesota.

We spent the rest of the morning in the observation car, enjoying the scenery from Denver on. We both chose the Angus beef burgers for lunch -- very good -- and enjoyed chatting with a lovely couple from Kansas City celebrating their 50th anniversary with a wonderful train trip -- a gift from their children.

Here's an entry from my journal:

3:45 pm, October 12 -- "The passing scenery here in the Colorado Rockies is absolutely incredible. I suppose the people who live here are used to it, but it's hard to imagine becoming used to such majesty. I'm here in our roomette, enjoying some quiet time for reading and study. I view these mountains and am moved at the power and majesty of their Creator. I'm reminded of the words of the hymnwriter: "I sing the mighty power of God, that made the mountains rise...".

We got off the train for a 10-minute stop in Grand Junction, CO. It was so nice to get off the train for a few moments and to stretch our legs. We walked through the station and around the other side to where there was a mailbox. Here we mailed some postcards (bought on the train) for our grandkids back home.

At some stops there isn't even time to get off the train, but whenever there is, passengers are reminded to heed the train whistle and the car attendant's call of "All Aboard!" Failure to heed this will result in being left behind -- and it does happen. As the car attendant reminded people while they were getting off, "The next train is in 24 hours!"

Our sleeping car attendants on all four trains were excellent. These folks work so hard to make sure their passengers are comfortable. Gwendolyn, the car attendant on this train, was a standout. We were sad to find she would be off duty on our return trip!

We went to bed around 10, setting our cell phone's alarm for 2:45 a.m. since we were to get into Elko, NV at around 3:20 a.m. The first thing that happened was that the alarm went off an hour early, since we had been in Mountain Time when we set it, and Elko is in Pacific Time. Then, the train was greatly delayed after Salt Lake City -- a common occurrence, according to Gwendolyn -- so we didn't get to Elko until 5 a.m.

The conductor came down to let us off, but prior to that a flustered Gwendolyn also appeared -- she had to make up our room for someone else who would be boarding the train at Elko. We quickly vacated the room so she could do so, and chatted with the conductor while waiting. We pulled into Elko, and he helped us off with our bags. On the platform, our friends waited with welcoming smiles. What good sports they were, to get up in the middle of the night to meet us!

For the next installment, I want to share a little bit about Elko, Nevada and some of our favorite places there, before returning to the Amtrak adventure. Stay tuned!
Posted by Mrs.T at 3:18 PM