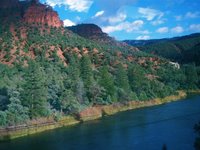 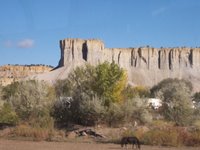 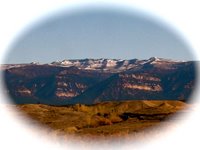 Eastbound on the California Zephyr

This part of our trip was an adventure to begin with! We knew it would be best to check ahead of time before assuming our train would actually be in Elko for us to board at 9:40 p.m. Everything we could determine from our phone calls and Internet checking said that the train would be on time, so around 9:20 we all drove to the train "station". (In Elko this is just a glass-enclosed waiting area with no amenities of any sort.) Others were waiting too, but no train. We waited, I think, close to an hour before receiving an update that the train had just left Winnemucca. From this we knew that it would be at least 2 more hours before it reached Elko. So we said our goodbyes to our daughter, son-in-law and baby grandson, all of whom needed sleep more than they needed to wait with us. Our friends graciously drove us back to their home, where we nibbled on popcorn and played a board game until it was time to head for the station once again.

We were sure we'd allowed plenty of time -- but as we approached the road to the station, my friend looked down and exclaimed, "There's a train down there!" It turned out to be a freight train (big sigh of relief here) and our "9:40 p.m. train" eventually arrived close to 1:00 a.m. Once again we had to thank our friends for their hospitality, kindness, and sense of humor with the situation.

Our car attendant, Reggie, welcomed us warmly and got us settled in Room 11 -- the exact same room we'd had coming out. We really slept quite well!

Saturday, October 21 -- After a good breakfast -- we both enjoyed the Bob Evans Scramble again -- we spent the rest of the morning in the observation car enjoying the splendor of the Rockies. We had a lovely conversation with the lady next to us, who struck up a conversation with us about our camera. She turned out to be a Christian. It was so neat how the Lord provided Christian fellowship on our journey!

For lunch, one of us ordered a supreme pizza and the other a grilled chicken sandwich, and we split them between us. The pizza was very good, but the sandwich was definitely my least favorite of all the dining car fare we sampled. (I should add that I never really care for the way grilled chicken sandwiches always tend to slide out of the bun anyway. I just keep ordering them now and then because they're healthier than some other choices.)

In Elko, I had begun feeling sort of sick (sore throat) and never was really sure if it was an actual cold or just the dry air. I took lots of Airborne and felt better in a couple of days. But now, I could tell I had fluid in my ears and it was making me sort of motion-sick. So I spent the afternoon in our room, after consuming some Sudafed and ginger-root capsules. I put on my Sea Bands® motion sickness wristbands at this point, and kept them firmly in place for the remainder of the journey!

I felt better by suppertime, and we both enjoyed the evening's special -- country-fried steak & gravy -- with potatoes (baked for me, mashed for Mr.T) and veggies (carrots and Italian green beans). I had had Mississippi Mud Pie at lunch, so skipped dessert now in favor of a cup of tea. We had a lively conversation with our dinner companions, Lil and Amber, a mother-daughter duo from Colorado and Utah, respectively. A snowstorm had prevented them from driving to a family event in Denver, so they decided to take the train instead.

Sunday, October 22 -- For breakfast this morning I had the Bob Evans Scramble again and Mr. T enjoyed French toast with sausage on the side. Our breakfast companions were an older Amish couple who own a cabinet-making shop in Illinois.

We spent time in the dome car, then returned to our room for devotions. We had lunch with Brad and Betty, a nice Christian couple from Colorado. Both husbands had the Angus beef burger and both wives ordered the Chicken Caesar Salad. We all had cheesecake for dessert. Our server, Bill, kept reminding us that the dining car desserts are "calorie free" so that's why we all had dessert!

After lunch, Mr. T spent more time in the dome car. I returned to our room, where I crocheted, dozed a little, and organized our carry-on bags. We would be getting into Chicago around 5:15 p.m. -- only a couple of hours late! The train really made up time en route, since we had started out about 4 hours late.

At Union Station, we headed for the Metropolitan Lounge. We stored our carry-ons and checked our other bags through to Springfield. Mr. T, along with Brad and Betty, who were still with us, went out to take a quick look at Chicago. They got something to eat at the food court in the station, since they would be traveling in coach class for the rest of their trip. Mr. T and I learned that we would be getting supper on the train, so we didn't buy any food. Soon enough, our train was boarding, so we again hopped aboard a speedy little baggage vehicle and were whisked to the proper car.

Next installment: First Class aboard the Lake Shore Limited
Posted by Mrs.T at 1:14 PM