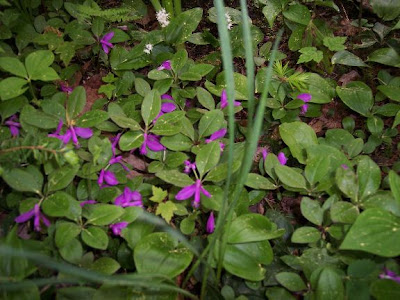 I know that last year I shared about this, but it's exciting enough to mention again -- the bird-on-the-wing is blooming again in the wildflower garden!

Last year I mentioned how that, many years ago, my daughter Carrie (a young teen at the time) planted a wildflower garden. She did so much work, clearing a spot at the edge of the woods, making brick paths, and transplanting wildflowers from our woods. Other people kept her in mind and brought her plants from their own wildflower gardens, or even from their regular flower gardens.

Her Grandpa T. was a true wildflower enthusiast who taught her much and brought her many plants. (He faithfully kept a list of the wildflowers he encountered each spring!) One such plant was the fringed polygala, otherwise known as bird-on-the-wing or gay wings. It is a beautiful fuchsia wildflower that to me looks exactly like a tiny fuchsia airplane, propeller and all! 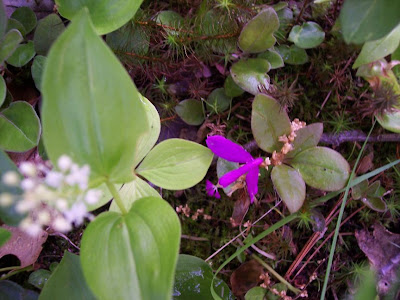 To my knowledge the bird-on-the-wing he brought never bloomed again -- until 2010. I was so thrilled and surprised to find it blooming! 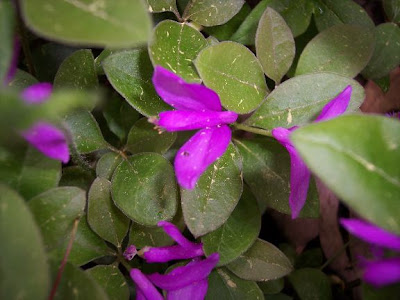 Last week I thought about it again and decided to check the garden. Sure enough -- it is not only there, but has spread. 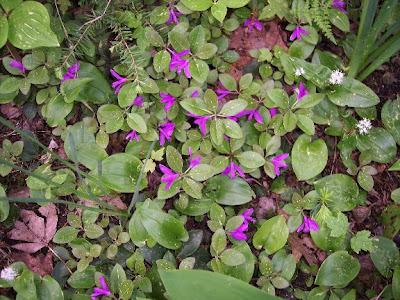 I hope that soon, Carrie will be able to take a few plants to her own home for one of her gardens there.

Here's what my wildflower book says about the fringed polygala:

"Fringed Polygala is one of those reticent little woodlanders whose small size causes them to be missed by many people unaccustomed to looking for small plants. This is especially true in the subdued light which prevails in its accustomed haunts. A large part of this peculiar plant is hidden underground in ithe form of slender, rootlike stems which branch freely and slowly spread farther and farther. These often bear a few closed, subterranean flowers which never open yet are self-fertile and produce seeds. Thus the plant has two seed sources on which it can depend for starting new generations. Its range extends from Quebec to Georgia, especially in the Appalachian system, and out into Wisconsin."
~ Wildflowers of North America, by Robert S. Lemmon and Charles C. Johnson 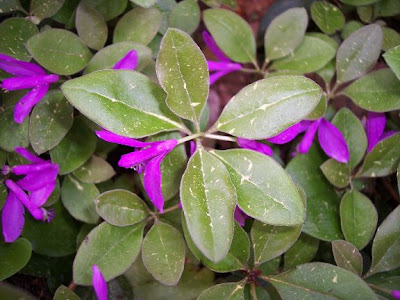 Maybe you have this wildflower blooming in your area! Have you seen it?
Posted by Mrs.T at 4:05 PM