This past Friday I had been asked to bring a layer cake to a ladies' event at church. And I also was recently the recipient of a bag of Meyer lemons. I decided I would make lemon curd from the lemons, which really needed to be used, and use it between the cake layers.

I had never made lemon curd before, but did have a recipe. When I looked at the recipe, though, I noticed that it called for using a double boiler. I don't own one and wasn't in the right frame of mind to try and improvise one while preparing an unfamiliar recipe. Then I remembered that sometimes the microwave works well for recipes which would ordinarily require the use of a double boiler -- puddings and such. So I looked on line for a microwave lemon curd recipe.

And found this one: Microwave Lemon Curd

(Photo from AllRecipes)
It came out really well. I ended up making 2 batches because I had six lemons. My first batch came out just a little bit too thin, and no amount of microwaving would thicken it after that. But it was fine after a night in the fridge. My second batch only cooked about 5 minutes. When the time was up, I didn't stir it right away. I found out by accident that it would stay thicker that way. It was excellent. 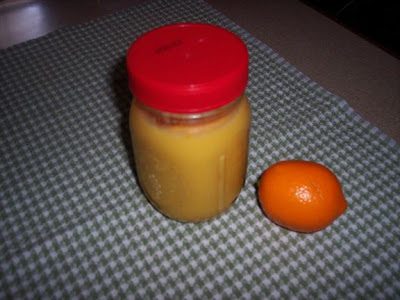 (Jar of finished lemon curd and a Meyer lemon.)

For the cake, I made a white cake mix using whole eggs and mixed some lemon curd into the batter -- perhaps a half cup or 2/3 cup. I assembled the cake with lemon curd between the layers and a lemon frosting on the top and sides of the cake. It was very good!
Posted by Mrs.T at 3:48 PM