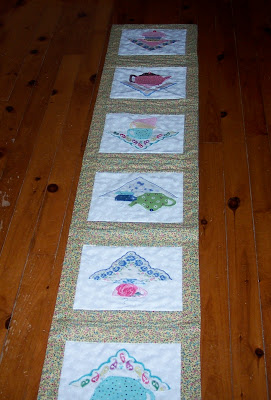 Some years ago, my mother gave me a bag of vintage handkerchiefs.  Some had been mine as a child, some had been hers, and I think some are even older than that.  She had kept them in a fabric bag in a dresser drawer all those years.  I just don't believe in doing that with heirlooms -- stashing them away so that no one, not even the person who stashed them there,  ever sees them or enjoys them.   I have always wanted to put these hankies to some good use, and had actually planned to make them into a quilt.  I was so determined to do this that I had found a free pattern I wanted to use and had even bought the fabric for the quilt.  I had even tried sewing several of the vintage hankies into the center of the quilt blocks.   But as much as I wanted to make the quilt, I just couldn't get enthused about the project or get off the ground with it.  I don't know if other people ever feel this way about projects, but sometimes I do.  It just wasn't looking as nice as I hoped, and, truth be told, was somewhat of a boring project.  (Hope my grandchildren never read this, as they are not allowed to use the "B" word.)

This year, I came up with the idea to use some of the hankies to make a table runner instead.  I wanted to make more of these for gifts, so I decided to use the kids' hankies that had been mine as a child in blocks for a sample table runner and see how it all worked out.  I decided to use the hankies as "doilies" or "napkins" under various tea-themed items such as teapots, teacups, etc. which I would applique out of coordinating fabric.  Well!  It took quite awhile, and some time on the part of several craft forum friends, to find enough motifs to use for the tea-themed items, but in the end, I ended up with more than enough ideas.

I made the runner for myself this summer, and it turned out quite well even using the cartoon-themed hankies and the brighter colors.  It was a fun summer project.

I planned to make two more, one for each of my daughters, for Christmas.  The hankies for theirs are some of the prettier floral designs, plus others.   I managed to get one runner done in time for Christmas, and finished the second one in mid-January.  Now that it is safely in Carrie's hands, there's no more need for secrecy and I can share pictures.

Hope you have enjoyed this look at my tea-themed table runners!  I am so happy to have found a use for those vintage hankies so they can be seen and admired at last.
Posted by Mrs.T at 3:41 PM