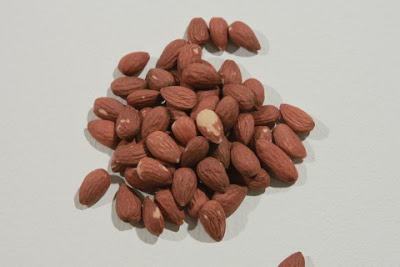 The other day I was browsing through one of my favorite Jane Brody cookbooks,  Jane Brody's Good Food Gourmet, and came upon a recipe for cinnamon-toasted nuts.  I had bought a bag of wonderful whole almonds at a terrific price a couple of weeks ago, and had been wondering just how to use them other than snacking on them plain.  Jane's recipe calls for both almonds and hazelnuts, and uses double the quantity that I used.  I chose to only make half the recipe because I wanted to be able to use some of my almonds for something else.

I must emphasize that these almonds are not a sweet, glazed type of snack.  They are plain and simple, roasted almonds dusted with cinnamon.  The only sweetness comes from the nuts themselves and the cinnamon.  But you might find, as I did, that they make a satisfying, healthy snack (in moderation, of course) that will help you stick to a healthy eating plan.

Preheat oven to 400º.  Spread out the almonds on a baking pan.  Sprinkle the cinnamon over the almonds and stir to combine.  Toast for 15 minutes, stirring every 5 minutes.  Cool before eating or storing.  I put mine in a little jar and they are retaining their cinnamon flavor nicely.
Posted by Mrs.T at 9:11 AM