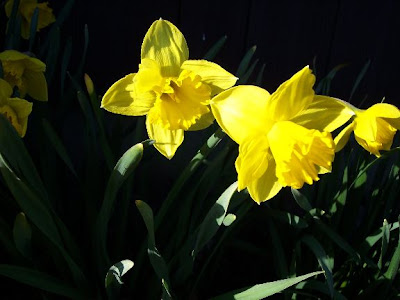 I had also signed up to bring some sort of baked goods for the Easter breakfast which followed our outdoor sunrise service.  I've brought many sorts of baked goods over the years, from doughnuts to cheese Danish, but this year I wanted to bring coffeecake because it is less labor intensive.  And I wanted to bring 2 kinds of coffeecake -- one gluten free and one not -- so that I could enjoy some of it too.  For the regular recipe, I tried a variation on a crescent roll Danish square recipe I've made in the past.  Here it is:
CINNAMON CREAM DREAM
2 8-ounce pkg. crescent rolls*
2 8-ounce pkg. cream cheese, softened (I used Neufchatel)
1 cup sugar
1 stick butter, melted
1/3 cup sugar mixed with 1 tablespoon cinnamon

Grease a 13x9-inch baking pan.  (I used baking spray.)  Preheat oven to 375º.  Open 1 package of crescent rolls and press the dough into the prepared pan, pressing seams together.

Blend the cream cheese and sugar together well; I used an electric hand mixer. Spread this mixture over the dough in the pan.  Open the second package of crescent rolls and cover the cheese mixture with the dough, pinching seams and edges.

Spread all the butter over the top of the dough, as evenly as possible.  Sprinkle all of the cinnamon-sugar mixture evenly over the top.

Cut in squares to serve.  Store any leftovers in the refrigerator.

*  My hubby picked up the crescent rolls for this recipe.  He got a store brand -- as I asked -- but mistakenly chose a variety called "Big'n'Buttery" or something like that.  There are only 6 rolls to a package (rather than the usual 8) and the package weighed more.  Think it might have been 12 ounces or more.  I decided that in this recipe it probably would be an asset rather than a problem, so this is the variety of crescent rolls I used.  I did bake it for at least 30 minutes, maybe more, since it was thicker than the ordinary crescent rolls.  I didn't taste these, but those who have say they turned out delicious.

I found the recipe in the April 2010 issue of Cook & Tell and the photo at grouprecipes.com.

Now, for the gluten-free coffeecake.  It took awhile to find a good recipe because many called for a gluten-free baking mix or cake mix, which I did not have on hand.  But then I found this one:  Gluten Free Cinnamon Swirl Coffeecake and oh my, I am glad I did.
I followed the advice to  test carefully with a toothpick for doneness; this is important here especially because when sliced, the center of the coffeecake doesn't look completely done.  But it is done if it has passed the toothpick test, and it is delicious.  This makes 2 loaf pans of coffeecake, most of which I have left for myself (it's in the freezer) because most people ignored the gluten-free offering.  My hubby, however, finds it absolutely habit-forming and thinks it is  one of the best gluten-free recipes I have tried so far.   This entire site -- Gluten Free Easily -- is new to me but I am very impressed with what I've seen so far.  If all of the recipes are as good as this one, I'll be returning to this site again and again.

Maybe your family would like to try one or both of these coffeecake recipes.  See what you think!
Posted by Mrs.T at 11:21 AM