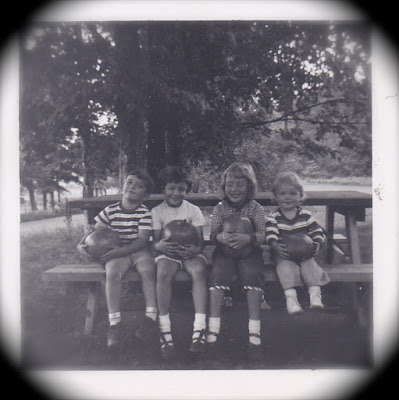 Here's a fun fall photo from my childhood.  It features my brother and me, along with two of our cousins.  We're sitting, as you can see, atop a picnic table, each holding a pumpkin.  Alas, I have no memory of this event -- only the picture.  The photo is undated, so I don't even know what year it was taken.  From the ages of the children, I'm guessing maybe 1957, but that's only a guess.

I don't know if our family grew the pumpkins.  Back then, one seldom saw the huge amounts of pumpkins for sale at farm stands as we see today. I can't really picture that my parents grew the pumpkins, though.  I'm not sure if they even had a vegetable garden in that time frame.  So my best guess is that the pumpkins were grown in my grandmother's vegetable garden at the farm next door.  She had a hired man who grew and tended the garden, and I remember being in that garden in the fall when he was harvesting shell beans.  So I am guessing he grew a few pumpkins also and that is how we acquired them.  But I will probably never know for sure!