So it's Wednesday again, and time for the Wednesday Medley hosted by Terri at Your Friend from Florida.  This week's Medley has a Mother's Day theme, so why not head over to Terri's and get the the questions to answer them on your own blog?  You'll have a ready-made Mother's Day post!

1. Where did your mom grow up?


She was born in Vermont, I believe, at her grandparents' home, perhaps.  Her father had a portable sawmill business and his family accompanied him to the job sites.  When my mother was a baby, they lived in a very old house on one of his jobs in a remote part of New Hampshire, and I  have often heard the stories of how the baby cried at night and didn't seem to be thriving.  Turns out a rat was getting into her crib at night and drinking the milk in her bottle.  I have no reason to doubt this story, though it seems unbelievable in our day. 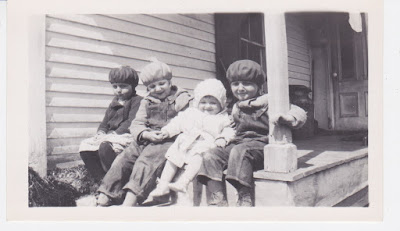 Later, her family moved to central New Hampshire, where they farmed and did maple sugaring in addition to a sawmill and lumber operation.  The photo above is of my mother and her three sisters on a farmhouse porch.  From these humble beginnings, my grandparents were able to send all four of their daughters to college.  Pretty amazing.

2. Tell us about her siblings, if she has/had any. Did you have a favorite aunt or uncle?

My mother was one of six children: four girls and then two younger boys.  Interestingly, all four girls became teachers, at least for a time. 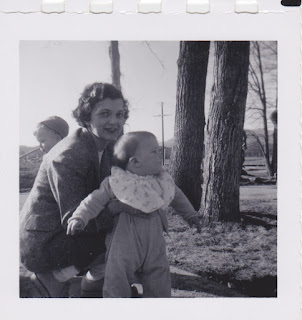 Although all of my aunts were special women, my favorite aunt was my aunt Joanne, the fourth sister in line.  I learned so many things from her!  The photo above is Joanne in 1957.  She was an amazing mother of six and was an incredible example to me as a mom and later as a grandmother.  She was a truly wonderful person who impacted the lives of many.

3. What is ONE of your favorite memories you can share with us of your mom?
Hmmm ... well, one thing I've been reminded of as I've been clearing out and selling items from my childhood home, is how lovingly she sewed clothes for my sister and me.  I've come across scraps of fabric from favorite dresses, and loads of sewing patterns from the 1950s and 1960s.  It was a blast from the past to think about clothing that I had, and a real reminder of my mother's love for us that at the start of a new school year she would sew whatever outfits we wanted.   The dress at right below was one of mine.  I can still remember the lovely fabric it was made from! 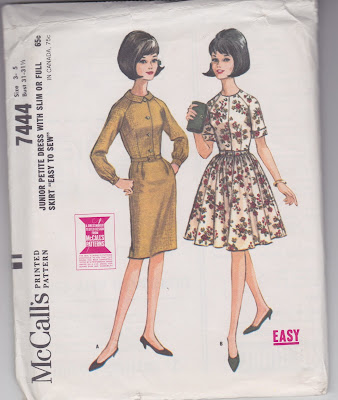 4. Please share a picture or two of your mom with us. 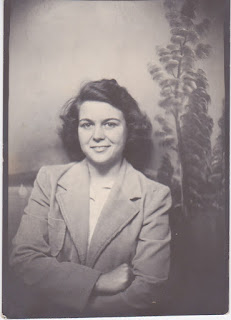 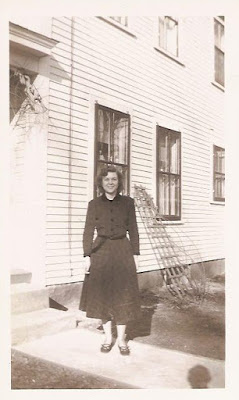 Both of the above photos are from the late 1940s.  I think the top one would have been during her college years and then the second photo from her years as a teacher.

5. Let's not leave out the grandmothers. Share what you will.


My maternal grandmother was a completely amazing woman.  I learned many things from her, but probably the things that impacted me the most were her adventurous spirit in cooking and baking and her love of holidays and  seasonal decorating, especially for Christmas.  I think that I also inherited my camera-phobic tendencies from her. 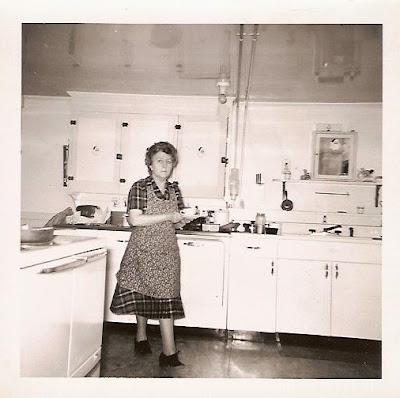 6. Do you have any special plans for Mother's Day?

I really don't, other than going to church.  However, another local church is having a Mother's Day luncheon and has invited our folks to join them.  I think my hubby and I will likely attend that, which should be very nice.  It was kind of them to ask.
And there is the Mother's Day Medley!  Happy Mother's Day to my fellow Meddlers!
Posted by Mrs.T at 5:00 AM