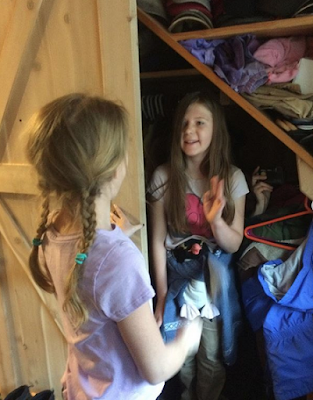 Yes, we recently had a very surprising visit from our daughter Joanna and several children.  Probably "surprise-filled" might be a more accurate way to describe it.  Mr. T and I knew she was coming, but many others (including some of her fellow travelers) did not.  Above you see Julia, the recipient of the biggest surprise, opening the coat closet door to hang up her coat.  Imagine her shock at seeing her cousin Emily (who lives in Nevada!) standing there waving at her.  If you look closely you'll see a hand back there to Emily's right.  That's Joanna, recording the moment for family history.

The trip East was completely Emily's idea.  She had a dream of wanting to come to Julia's house and surprise her for her birthday.  Mr. T and I have  a "companion certificates" benefit with our SkyMiles cards, which essentially means we can each buy one ticket and get a ticket free with that purchase each year.  So two from their family traveled free and two tickets were paid for.  In addition, two cousins of compatible age traveled east with them for free, using their dad's SkyMiles.

Julia's parents knew the Nevada contingent was coming, but her siblings did not.  It was a surprise to all of them.  Mr. T and I knew, of course, having made the arrangements with our miles and certificates. 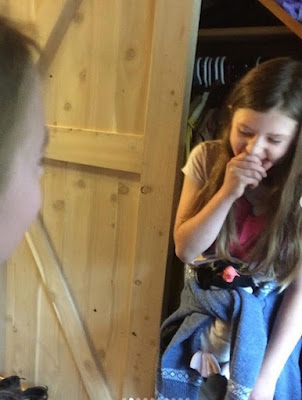 I had reminded Emily's mom that the end of April is an ugly time in New Hampshire.  (It was actually even uglier than usual.)  But Emily was determined.  Julia's birthday is April 29, so that was the time frame in which they would come.

Everyone who knew kept the secret very well.  My hubby picked Joanna and the kids up in Boston and brought them to our house to sleep for awhile.  Several hours later, we all loaded into our large van and headed for Julia's house.  We stopped a short distance before their house and all of the surprise guests crowded into the back of the van and crouched down.

We knew that Carrie had taken Julia out birthday shopping, along with 4-year-old Ari.  So surprising the boys would come first.  As we parked in Jim and Carrie's driveway, Joanna got her camera ready to record the boys' surprise. 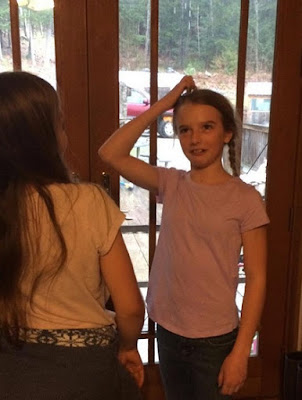 Mr. T and I went in and made a flimsy excuse for being there.  Rainy day, we needed to get out of the house for awhile ... something like that.  After a few minutes of chit-chat, we told Sam and Josiah that there was something in the back of the van we needed them to bring in.  Sam, 15, asked: "Was this pre-planned?"  My heart stopped.  Did he know?  But no, he was just wondering if we deliberately left these items in the back of the van so the boys would have to fetch them.  The boys pulled on their rubber boots and went out.

I don't have any of the resulting photos yet, but from what we could see out the window, one boy was completely mystified and the other couldn't stop smiling.

After the explanations had been made, we made a plan for surprising Julia.  Emily and Joanna would hide in the coat closet, and the others would hide downstairs in the garage.  (Baby chicks purchased the evening before made it even more interesting down there.)  Jim had texted Carrie when we all arrived, so she let him know when she and the girls were en route.  When we heard them coming up the driveway, Jo and Emily took up their positions in the closet.

So the girls came in, expressed mild surprise and excitement at seeing me and Grampa there, and took off their coats.  It was still raining quite hard and Julia was just going to hang her jacket on the doorknob, but her mom suggested she hang it in the closet.

Of course, the rest is history.  Recorded history.

All Julia could say was, "What?"  Of course we all shouted, "Happy Birthday!" but her stunned surprise continued for quite some time.  Then it turned to laughter. 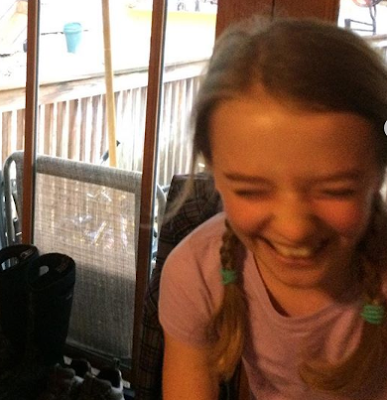 Finally someone suggested Julia take Emily downstairs to see the new chicks.  Where, of course, more surprises awaited in the form of Emily's brothers Darrin and Elliott and her cousins Ben and Ava.  Joanna had also surprised Darrin and Elliott, who had no idea that anyone but Emily and Mom was traveling to New Hampshire!  When Joanna and Emily left for the airport, they simply went around the block and came back to hand out the "going away gifts" to the stay-at-home siblings.  Darrin's and Elliott's gifts were their plane tickets.  What a glorious surprise all around.