Waffle buffet: a fun meal for guests any time of day! 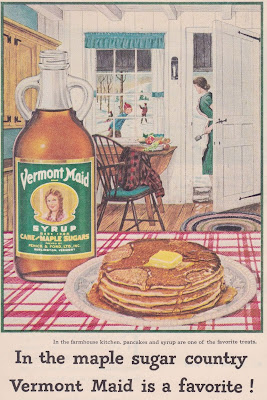 One thing we wanted to do while our Nevada daughter was here was to plan a simple way for my hubby's 92-year-old mom to see and enjoy her visiting great-grands along with some of the local ones.  We decided to have a simple meal to share at our home on Sunday afternoon/evening.

The next decision was what to serve.  There would be about 18 people.  Our Nevada grandkids had made a few requests of both Grammy and Aunt Carrie (especially Aunt Carrie) for meals they would enjoy while here.  One was Grampa's waffles!  We decided to plan a simple waffle buffet.  It worked out so well, I would like to share the idea with others.

This was the menu:

I cooked the sausage and bacon in the oven, which makes things really simple.  I made the fruit sauces ahead of time and served them warm, right from the saucepans on the stovetop.

We set up several tables and put a stack of sturdy paper plates along with napkins, cups, and silverware in a central location near the waffles.  We borrowed a waffle maker from friends so that we could cook more waffles at one time.  Theirs is the fancy type that one turns over partway through cooking, and one of those is definitely on my hubby's wish list!

When a good number of waffles were ready, I transferred the bacon and sausage to paper-lined serving plates, having kept the meats in the oven until that point.  We placed these on our dining table along with the whipped cream, maple syrup, and lemon curd.  People would go through the line, get a plate, utensils and a waffle and then proceed to the stove if they wanted a berry sauce and to the table if they wanted one of the toppings available there.  People sat where they liked (we also had a table set up on the deck, but it was a bit chilly and no one sat there) and it was all so easy and simple.  People came back for seconds and even thirds.  Mr. T ended up using all the milk in the house as he made a third batch of waffle batter.  (He had thought a a double batch would be plenty.)  Every last waffle got eaten!

We offered only water for a beverage because no one seemed to care about coffee or tea, but depending upon the group (and the time of day) I would offer hot beverages another time.

Here are the recipes for the waffles and the berry sauce.

Add the milk, melted butter, and vanilla to the beaten eggs in the large bowl.  Sift the remaining ingredients into the liquid and beat until smooth.  Bake in waffle iron according to the directions for your particular waffle iron.  Yield:  10-12 waffles.

This great recipe is one I copied from The Beany Malone Cookbook, which shared recipes used by the Malone family in the series of books by Lenora Mattingly Weber.  The vanilla was not in the original recipe, but makes a good recipe into a super one!

Mr. T used to make these every single weekend in years gone by -- and, in 2015 he had this recipe published in a Gooseberry Patch cookbook!  You can read about it in this post if you missed it: He Was Published!. 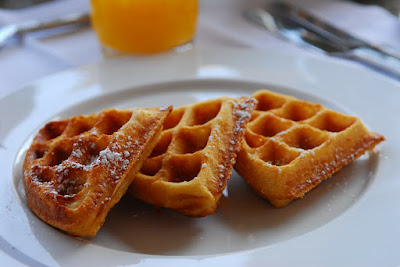 BERRY SAUCE FOR PANCAKES OR WAFFLES

This is a wonderful, versatile recipe that tastes so good on waffles in particular. It’s also good on pancakes or French toast and would probably be good on vanilla ice cream as well. You can make blueberry sauce, raspberry sauce, or strawberry sauce -- all are wonderful. Or you might like to use a mixture of these berries to make a mixed berry sauce. When I do that, I usually also add a few cranberries to the mixture. 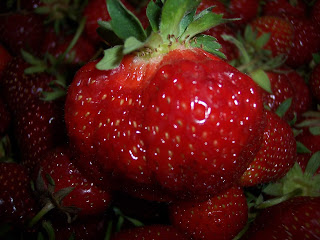 Other toppings that might be included would be peanut butter, applesauce, jams or jellies, or chocolate  hazelnut spread.  You could even branch out and make a savory topping like chicken and gravy or sausage gravy, but if you did that I think you'd want to omit the vanilla from the waffle batter.

We were so pleased with how this hospitality idea worked out, and people seemed to love it.  We are planning another waffle buffet for a smaller group very soon!
Posted by Mrs.T at 12:29 PM