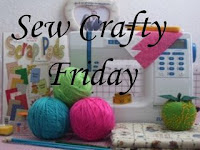 For today’s Sew Crafty Friday, I’m sharing something that is mostly finished, but still can’t really be considered a completed craft, because the next ones I make will hopefully come out much better. This one was just a practice run. These are family photo ornaments which I found in a Gooseberry Patch Christmas book. I have been wanting to make these for several years, but didn’t have as many old family photos as I wanted to work with. Now I do, and I have done all the preparatory work of scanning them and turning them into JPG images.

I wanted to make just one ornament first to see if I could get it to work. Here is the (very imperfect) result. The first photo shows the ornament lying on a table. As you see, the writing on the “label” is a bit messed up because the marker bled into the material. I’ll be more careful next time! 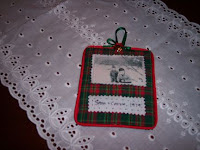 The second photo shows the ornament hanging on a wall. The ornament is supposed to have little black felt triangles to look like “photo corners” but I had forgotten to put them on when I took the first picture. They are in place now! 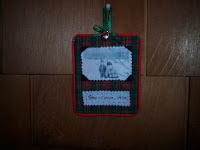 The pattern actually calls for making one’s own welting or piping for the edges of the ornament. I would like to try doing that, but for this one I just used some red piping which I had on hand and it worked fine. (And I have bought more piping in dark red, green, and cream for subsequent ornaments.) They also suggest using a bit of greenery with the bow and charm at the top of the ornament. I didn’t have any appropriate sized silk greenery on hand, so skipped that. For a charm at the top I used a jingle bell button which I had. It seemed appropriate with this snowy outdoor photo.

If anyone is interested in making these, I refer you to Gooseberry Patch Christmas Book 3. This is a Leisure Arts publication -- mine is a paperback, and I think I bought it at Walmart or Jo-Ann’s. It’s an older one, so you could probably find a copy on eBay or in a used-book place. In fact, I just checked on Amazon and they have used copies here for $4.99 and up.


That is about it for my crafting efforts this week. If you have managed to accomplish or even start any crafting, then head on over to Waiting for Him and share your projects. Shereen and others will be eager to see what you have to share. Happy Crafting!
Posted by Mrs.T at 1:48 PM