About those cross-stitch samplers 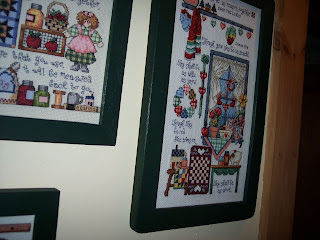 Recently someone commented on the cross-stitched samplers I had shared on a Show & Tell Friday some weeks ago; I believe it was way back in November. The lady was interested in knowing what patterns I had used to stitch the samplers and if she could obtain them so that she might make some similar samplers of her own.

It occurred to me that others might be interested in having this information, so I went to my stash of Cross Country magazines and looked up the patterns I had used. The patterns are from Cross Country Stitching magazines. All of these back issues are still available. Here are the issues the samplers may be found in:

The Philippians 1:11 sampler (titled "Kitchen Wall") was in the February 1995 issue.

Hope this information is helpful to someone and that you will have as much fun stitching these samplers as I did!
Posted by Mrs.T at 11:45 AM