It may seem simple, but another thing my Nevada daughter wanted her kids to experience was picking strawberries.  As it worked out, peak strawberry season fell during the time they were able to be here.  We took a morning jaunt to Pierson Farm,  our favorite place for U-pick strawberries.  Since this is in Vermont, it made another state for the grands to visit.  They spent time in four of the six New England states while here!

I wish I had gotten some pictures of the picking in progress, but I did not.  I am quite certain that they did, so when they send us their photos, I may add some in.  The kids all pitched in, and some of the cousins and their parents met up with us in the fields too, so it was a fun time.

I had planned on getting two flats, but my son-in-law decided to buy a third so there would be plenty of strawberries to eat fresh as well as to freeze. 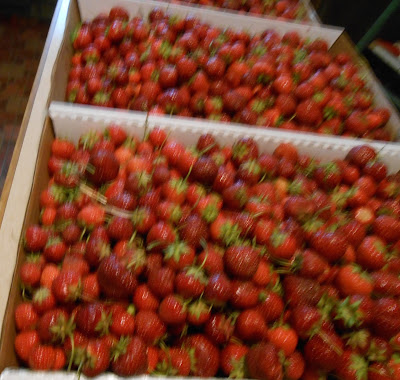 After lunch we washed and hulled the strawberries and began the process of quick-freezing them.

So much fun, with a delicious yield at the end.  I had intended to make strawberry shortcake the way we had it at the Brunswick Diner in Maine -- with vanilla ice cream sandwiched in between the biscuits and strawberries -- but it just never happened.  Maybe next visit!
Posted by Mrs.T at 3:41 PM