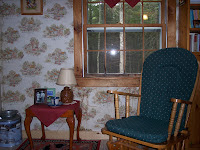 When we built our house, we planned in a sizable landing at the top of the stairs. I had the idea, at the time, that it would be a neat place for a little reading or sewing area. Well, that never happened. Instead, it became more of an unofficial “office” area. Yes, there was a bookcase there, but as time went by, a desk ended up there, then a file cabinet, then a computer... you get the idea.

Well, now all of the kids are grown and gone. Our son’s room has become a computer room/library, and our daughters’ room became our guest room. Neither of these rooms are completely the way we want them to be yet, but we’re getting there ever so slowly. The desk and computer ended up in the computer room, and the file cabinets finally joined them last winter. At last I could begin to think about my cozy nook at the top of the stairs!

(Please disregard the nasty-looking water damage on the wallpaper. This little nook is in a large dormer window, and this water damage is a result of ice backing up. Someday, Lord willing, we’ll replace the wall covering here, but there are lots of other improvements on the list before that.)

To furnish this little nook, I didn’t spend much money at all. Nearly everything was something we already had on hand. I spent a grand total of around $14 on what you see here, and $13 of that was on the rug. It was the perfect finishing touch to pull everything else together. The other $1 was spent on the table covering -- actually a napkin from the Walmart clearance aisle. Two other napkins are draped over a tension rod to form a “window treatment”, which you can just barely glimpse in the photo.

The chair was a cast-off from the living room which had been relegated to the master bedroom. The little “table” is actually the seat to a cabinet-style sewing machine. We removed the padded seat (there’s storage under it) and just made a plywood insert to fit it and create a “table top”. With a cloth over it, no one would ever guess. The lamp, doily, teacup, family photos, embroidered Hummel picture, and milk can were all in other places in the house originally. I love the way the chickens/rooster in the crewel picture go so perfectly with the rooster in the rug, and how all of the colors came together to work so well with the existing wallpaper. Little things, yes -- but little things that just remind us of how God cares about even the tiny details in our lives. I love to commit things to Him and then just watch Him work!

This cozy nook is everything I dreamed it could be... now if only I could find the time to sit here!
Posted by Mrs.T at 3:49 PM