So it was on my mental, if not my actual candy list for Christmas 2021.  If I had really been thinking, I would have had us make this fudge during our candy making day with the grandkids.  It's one of the easy fudge recipes that has you melting baking chips (white, in this case) with sweetened condensed milk (caramel flavored or dulce de leche in this case).  I had a can of the former in my pantry so that is what we used.

But this was after our candy making day, and Mr. T wanted to make something else from the candy list, so I suggested this easy sounding recipe.  As you see in the recipe if you follow the link, after melting the morsels and condensed milk together and spreading the mixture in a square pan, the next step is to melt either milk chocolate or dark chocolate morsels, spread them over the top, and then sprinkle on some sea salt.

And right there is where Mr. T ran into trouble.  He asked me if I thought he should chill the caramel layer or let it set for a time before adding the chocolate layer.  The recipe didn't say.  It had you seemingly going from one step directly to the other.  Well, I assumed there was probably a good reason for adding the chocolate layer right away ... namely, so that it would adhere well to the caramel layer and not flake off when the fudge was cut.  So I told him to go ahead and add it right away.

When he did, he was quite dismayed.  Rather than staying as an even layer on top of the caramel fudge, the chocolate (we had used dark chocolate) oozed down into it in a most uneven, and to his mind, unsightly way.  You can see a few of the remaining pieces and how they looked in the photo below. 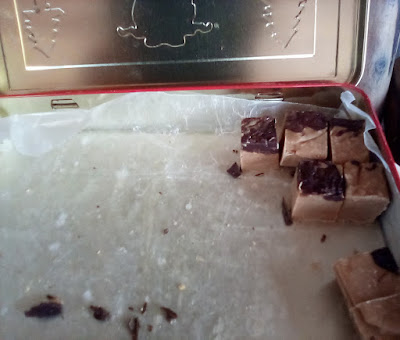 When it was cooled and cut we found the fudge to be absolutely delicious.  However, he was still troubled by the way it looked.

We usually put masking tape labels on our cookie and candy tins so we can easily locate the varieties we want for a specific use.  Imagine my surprise, then, when I later saw the way he had labeled the salted caramel fudge container: 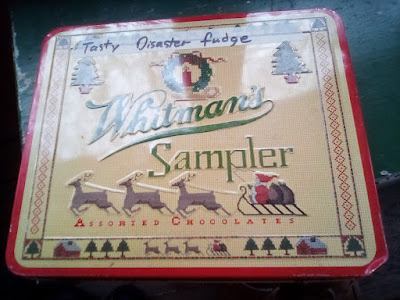 This not only brought a chuckle to me, but it's been fun for others too.  On Monday night, we had our two oldest granddaughters over for our traditional "Christmas Eve" supper and gifts with them.  (This event hasn't taken place on the actual Christmas Eve for many years.)  Before they left that evening, we invited them to choose an array of cookies and fudge to take home with them.  They had liked the salted caramel fudge, so Mr. T brought in the tin so they could take what they wished.  I was busily hunting for plastic containers, so I didn't see this reaction, but I sure heard it as two laughing young voices chorused incredulously,  "Tasty Disaster Fudge?!?"

It may have a funny label, but it's a very delicious fudge.  Next time, he will let that first layer set before adding the chocolate.

Quote of the day

(Nevada ranch at top) Recently, for the second time, I came upon this quote while studying for my Sunday School lesson.  It spoke to ... 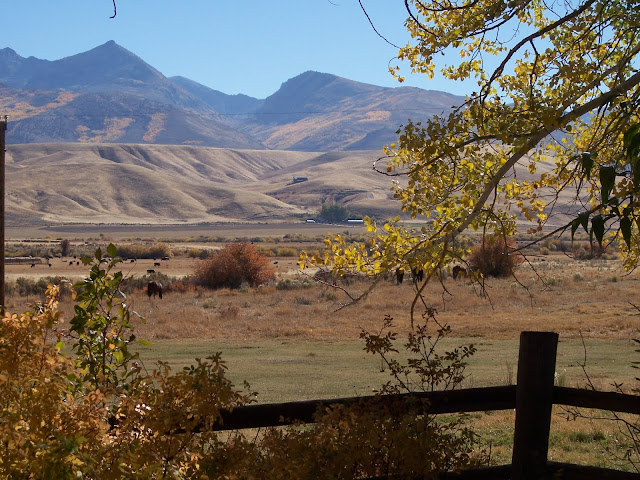