An October treehouse lunch with friends 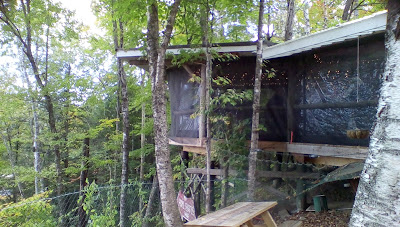 In early October, I had the fun of going out for lunch with some friends from church.  I think there were eleven of us, four couples and three ladies.  Mr. T was working so was unable to join us.  One of the ladies had heard about this little restaurant and had taken some of the others there.  The place was closing for the season soon and so a group of friends decided to go out for lunch before it did.

The place was originally a one-room schoolhouse, then for many years was a seasonal craft shop.  Some crafts are still sold there, but a couple of summers ago the owners decided to add on a dining area/kitchen and make a seasonal restaurant out of the building. The dining area is decidedly casual and feels absolutely like one is dining in a tree house!  The tables are made out of vertical slices of trees (I didn't get any photos inside) and the chairs are tallish (but not too tall) stools featuring metal tractor seats.  They don't look comfortable, but they actually are.  The dining area is built out over a ravine and all of the inside trim is made from logs.  It looks like a restaurant the Berenstain Bears might frequent!

The food was yummy here.  I had scallops, hand-cut fries, and coleslaw.  The tartar sauce with the seafood was homemade and fantastic.  The prices were not much more than at our usual seafood place, but the servings were definitely smaller.  Still, I think we all felt willing to pay a little more for such an unusual ambiance.

There were also a large number of picnic tables, outside, as seen in the top photo, if one prefers to eat outside of a treehouse. 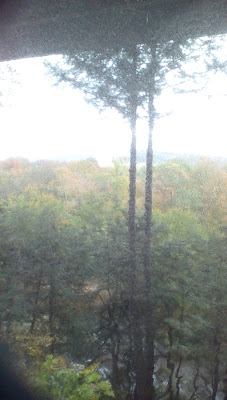 The above photo was taken from inside, through a screen and a layer of plastic.  But it gives you an idea of the river below and the mountains in the distance.  All of these were taken with my Kindle. 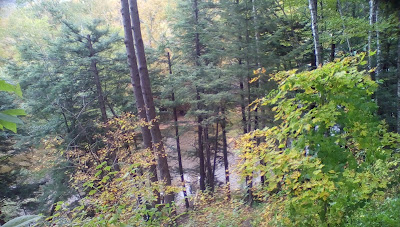 Both this photo and the one below show the river flowing below the treehouse. 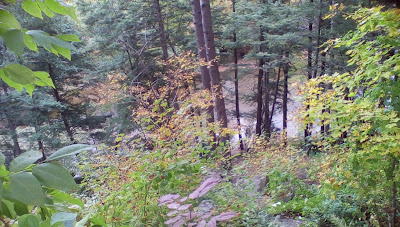 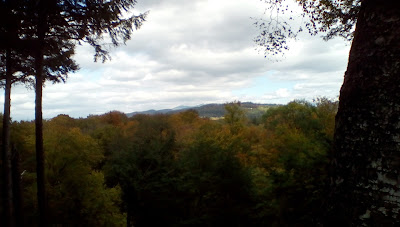 It was a cloudy, dreary day when we visited but the fellowship was warm and  cozy.  The above photo shows the distant mountains, some of the autumn colors and many clouds!

You can see why this is a seasonal place.  It would be very hard to heat in late fall, winter or early spring.  But as soon as they do open in spring (my guess would be Memorial Day) I plan to return and show this fun restaurant to my hubby!
Posted by Mrs.T at 5:00 AM